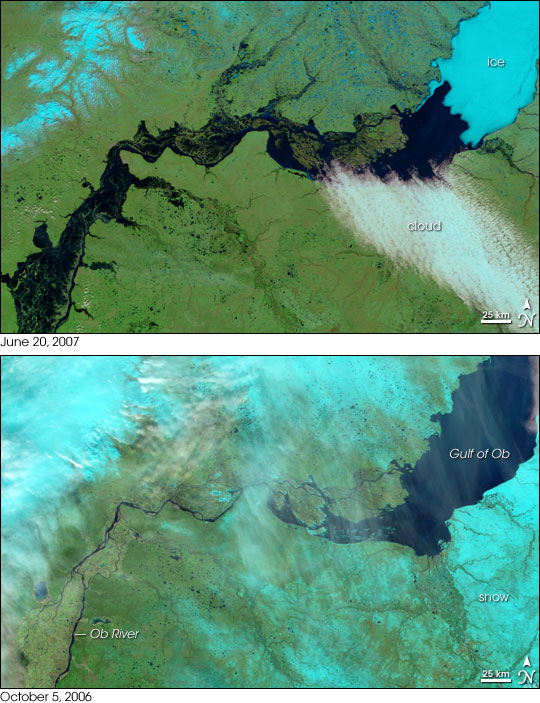 As much a sign of spring as longer days, greening plants, and melting snow, the Ob River had spread across its floodplain in far northern Russia when the Moderate Resolution Imaging Spectroradiometer ( modis.gsfc.nasa.gov MODIS ) on NASA's terra.nasa.gov/ Terra satellite captured the top image on June 20, 2007. The Ob River and its tributary, the Irtysh, together form one of the longest river systems in Asia, flowing from the Altay Mountains of northern China to the Arctic Ocean. The northern reaches of the Ob flow over a flat, permafrost plain.

As spring creeps north, the snow that covered northern Russia gradually melts, and the runoff flows into the river. Swollen with spring runoff, the river flows north, where it meets ice jams on sections of the river that have not thawed. Since the river cannot cut deep channels into the frozen land, it flows out over the surrounding plain during the spring melt, creating the wide band of water seen in this image.

The lower image shows the Ob River in the fall, immediately before winter secured the region in its frozen grip. The river was a fraction of the size it would be the following spring. Both images were made using a combination of visible and infrared light. Water is black and dark blue. Snow, light blue, dusts the ground south of the Gulf of Ob in the October image and covers the peaks of the Ural Mountains west of the river in the June image. Also in the June image, a smooth pane of ice, also light blue, covers the Gulf of Ob, providing the natural dam that created the floods shown here. Pale blue, frozen lakes dot the permafrost north of the river, and darker, ice-free lakes adorn the land to the south of the river. Plant-covered land is green, and clouds are light blue and white.

You can download a eoimages.gsfc.nasa.gov/images/imagerecords/18000/18558/ob_tmo_2007171.kmz 250-meter-resolution KMZ file of the mouth of the Ob River suitable for use with earth.google.com/ Google Earth.

Uploaded by Greg Williamson on August 2, 2011